The West End’s Les Miserables, is a humorous and heart-breaking adaptation of Victor Hugo’s (who also wrote The Hunchback of Notre Dame) novel of the same title, brought to life through the marvellous medium of song. I will admit that I went to see this way back in March and there has been a cast change since then but I assure you that it remains just as spectacular as it was all those months ago.

The story takes place in pre-revolutionary Paris, where the impoverished are kept in poverty and the rich become wealthier. After Jean Valjean (Daniel Koek [covered by Chris Holland on the date I saw]), a man who broke his parole, witnesses the death of Fantine (Na-Young Jeon), a woman who formerly worked in his factory, he takes her daughter, Cosette (Samantha Dorsey), into his care. She was previously being taken in by the Thenardiers (Cameron Blakely & Wendy Ferguson), who abused her.

Years later, revolutionary groups are being created. One of them is run by Enjolras (Anton Zetterholm), and is participated in by Marius Pontmercy (Rob Houchen). The Thenardiers’ daughter, Eponine (Carrie Hope Fletcher) is hopelessly in love with him, which he is oblivious to. Instead, Marius falls in love at first sight with the now-older Cosette. Because the police inspector, Jarvert (Tam Mutu), almost finds them after searching for years, Valjean and Cosette are forced to run for England, leaving Marius behind.

Meanwhile, Enjolras is planning a movement against the monarchy. As the battle rages on, many characters die, but Marius and Cosette end up together, marrying with Valjean’s blessing. 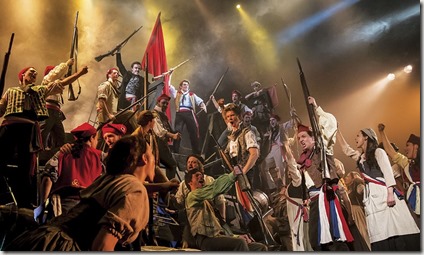 The set of the West End production is spectacular. Based on a revolving stage, the main piece of scenery is a gigantic structure that the actors are able to move around and transform while transitioning between scenes. It changes beautifully from a building to a barricade.

The music is absolutely unforgettable. Even as I sit here six months later, I can still hear it in my head. Not only the songs with lyrics that will make you weep, but also the twinkly transition music, full of hope and stars. The music of Les Miserables is simply magical. There is nothing like it in the world.

Adam Linstead’s solo verse as Grantaire in the song Drink With Me is such a heartfelt, poignant moment. It was a travesty to cut them from the film version, as I truly believe that those words have so much meaning for all of the characters, and show the theme of the entire musical.

“Drink with me to days gone by,

Could it be you’re scared to die?

Will the world remember you when you fall?

Could it be your lives mean nothing at all?

Are our lives just one more lie?” 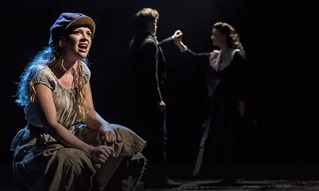 Of course, the acting is astounding. Carrie Hope Fletcher, in particular, shines. She brings the character of poor Eponine to life, depicting her as a girl who never really knew love but had a lot of it to give. With a stunning singing voice, Carrie is an extremely talented lady with a bright future ahead of her. She will be taking some time out as Eponine this year while she is touring the country as Beth from The War of the Worlds – The Final Arena Tour. Look here to see if tickets are selling in your area. You can also visit her YouTube channel here.

After the show, I briefly met Carrie as well as Jonny Purchase and Dale Hodge, who are members of the ensemble. Everyone was lovely, taking the time to talk to their fans despite not having long for their between-shows break.

If you get the chance, Les Miserables is a monumentally impressive show and I recommend that you go see it when you can. The current cast are:-

I would recommend this to:-

(Pictures of the 2014 cast belong to Johan Persson.)